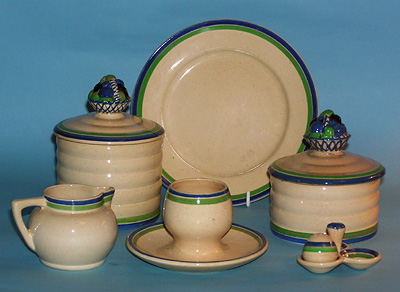 The Ashtead Pottery had a short life, being in business for just 12 years from 1923 to 1935. The factory was in the village of Ashtead in Surrey, England. It was set up with the aim of providing employment for disabled ex-servicemen, mainly from the Great War of 1914-18.

The main driving force behind the creation of the company was Sir Lawrence Weaver, a highly influential man of the time. He received much assistance from Bertrand Clough Williams-Ellis (of Portmeirion fame) and Richard Stafford Cripps, a prominent politician of the time.

From a very humble beginning with just for four workers the company quickly flourished and at its busiest it gave work to up to forty men. Very few of the workers originated from Ashtead, most being recruited from Labour Exchanges throughout the south of England. Hardly any had skills relevant to the pottery industry, although some had artistic or modelling experience. Most found lodgings locally and a later date Purcell Close was built to provide some sheltered housing for those workers with families.

The company produced a vast array of wares, ranging from figures and commemoratives designed by leading artists of the day, including Phoebe Stabler (Poole and Royal Doulton) and Percy Metcalfe, through to everyday crockery in bold bright designs. The Ashtead Potters exhibited at the Wembley “British Empire Exhibitions” of 1924 and 1925 having working stands where the potters showed off their skills and wares.

The great depression, increased competition and the untimely death of Sir Lawrence led to eventual closure of the pottery in January of 1935. The Victoria Works building remained until 1985 when it was demolished for the site to be redeveloped as a sheltered housing project for the elderly. A plaque in the entrance to Lime Tree Court, as it is now known, commemorates Ashtead Potters Limited.