Here are two sizes of the “Samuel Johnson” character jug. Only the smaller blue jug is actually the advertising ware. The jug was produced to promote the Barclay and Perkins Brewery of Southwark, London, later to become part of the Courage group. The jug is inscribed “Samuel Johnson L.L.D. 1709-1784” on the left hand side and “Barclay’s Ales Stout and Lager” on the right. This one (J56) is finished in Powder Blue glaze (f). These jugs have also been seen in jade green (v) and yellow (b) glaze.

The larger jug bears the “Samuel Johnson” inscription but not “Barclay’s”. The glaze is Buff/Cinnamon (t).

Samuel Johnson, known as “Dr Johnson”, was a lexicographer, author and critic and is particularly remembered for his dictionary of 1755.On coming to London he lived at and wrote on several occasions about the Thrale’s Anchor Brewery which was later to be acquired by Barclay and Perkins. More information on this can be found by following the Thrale link on the links page.

The reverse states “with the compliments of “Ideal Home Magazine” “strictly limited edition”.

This piece carries a small embossed “Phoebe Stabler” on the left side of the plinth and the decorators mark of William Robinson. It is not known how large the limited edition was (this model pops up fairly often at fairs and auctions).

Quite how many magazine tokens one would need to save to get a work by Phoebe Stabler now doesn’t bear thinking about! 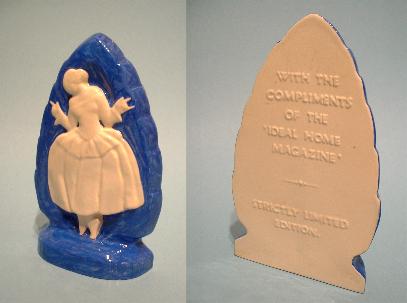 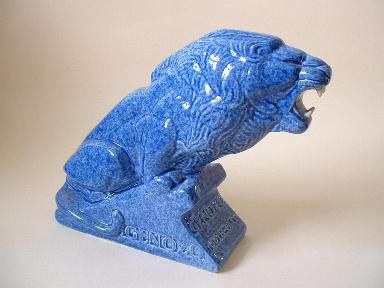 This model although similar in size to the “Wembley” (M2) lion, is quite different. The modelling is much “rounder” with less of the sharp lines of the Wembley model. Both were designed by Percy Metcalfe. The “Genozo” lion, as far as is known, was only produced in blue glaze. The Lion was used in chemists shop promoting “Genozo” brand toothpaste.

This advert was scanned from a 1938 Times of India Annual which contains a full-page black and white advert for Genozo toothpaste. 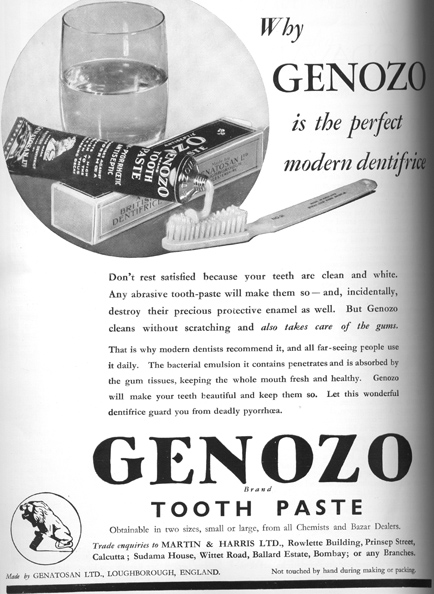 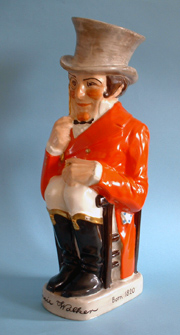 Designed by Percy Metcalfe, this jug stands over 40 cms tall. It promoted the well known brand of Scotch Whisky. Johnnie Walker “born 1820, and still going strong!” sits in a ladder back chair similar to that shown in the Benjamin Franklin pictures. These jugs are highly collectable as they appeal to both Ashtead and breweriana collectors. This model can also been found undecorated in plain pearl barley (k) glaze.

This is the smaller of the two sizes made by the Ashtead Potters for Guinness at 11.5cms. The larger size has a diameter of 13cms. Both carry the same “Phiz” cartoon. This ashtray was also made by Minton’s amongst others.

The Froth Blowers, set up in the 1920’s, were dedicated to the drinking of beer! Unlike the Friendly Societies of the time, the Froth Blowers were a fun organisation which also raised money for charity, the main beneficiaries being “the waifs of the East End of London”. The Froth Blowers had their opponents in the Temperance Movement, but did enjoy a huge membership and raised many thousands of pounds. However, the organisation was short lived and had disappeared altogether by the end of the Second World War.

The Froth Blowers had a society handbook and regalia. Ashtead produced three models of the tankard. There was the standard size (shown above), this held a pint and a third – a pint of ale and the third for the froth! Also produced were the larger size “Blaster” and “Tornado”. The larger sizes were available to members who had introduced new recruits to the Froth Blowers – 100 new recruits were needed to become a “Tornado”. In addition to the Ashtead mugs the Froth Blowers also sold initialled cufflinks, cigarette cases and silver tankards.

There is a fascinating article about the Froth Blowers and Bert Temple, The Honourable Secretary (Froth Blower No.O) and founder via this link. 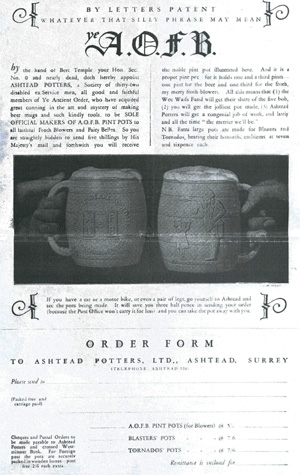 The inside of the mug bears the inscription “moderation”. The outside says ” The more we are together, the merrier we will be”.

An advertising ware for Hope’s Heating and Lighting Limited. Modelled by Percy Metcalfe. Prometheus along with his brother Epimetheus were charged, according to Greek Legend, by Zeus to create mankind. Epimetheus made a start but gave all of best gifts – speed, cunning, fur – to the animals. Realising what he had done he asked Prometheus for help.

Prometheus thought of a way to make mankind superior. He fashioned man to be a nobler shape, upright like the Gods. He then went to the heavens and on to the Sun where he light a torch and brought back fire. This protected man better than anything and gave warmth. The model shows Prometheus with his flaming torch. 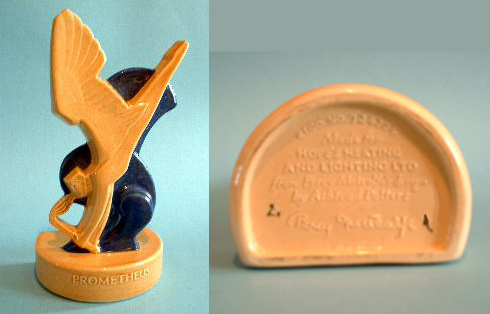 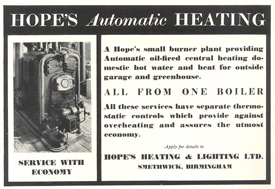 Hope’s Heating and Lighting were from Smethwick in the West Midlands. They manufactured and installed appliances such as boilers and gas lighting. It appears that Hope’s were in business from 1818 until1958 but were later absorbed into part of the Tarmac Group, which itself was taken over. The site in Smethwick was subsequently shut down.

James Crossley Eno, a Pharmacist, began selling his fruit salts preparation in the 1850’s in Newcastle. By the 1880’s the business had grown so much that a new factory was built at New Cross, London to keep up with demand. John Crossley Eno relied heavily on advertising to sell his product. Ashtead produced the plaque and a jug for this purpose. Sir Lawrence Weaver was a Director of Eno’s, hence the Ashtead connection. 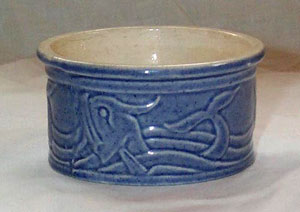 One of many small pots made by Ashtead, this one is decorated with fishes and has the impressed mark “George Mason and Co Ltd, London SW” on the side in addition to usual Ashtead marks on the base.

Not strictly an advertising ware, this advertisement appeared in the programme for a production of “The Gondoliers” held in the Peace Memorial Hall, Ashtead in December 1929. 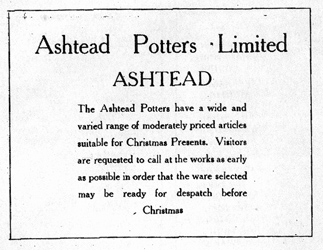