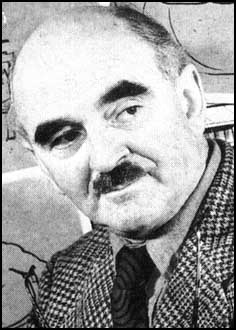 Low was a New Zealand born political cartoonist. He was self taught. His career started in New Zealand before moving to Sydney in 1911 to join the Bulletin . He arrive in London in 1919 to work on the London Star newspaper, before subsequently working for the London Standard (1927-1950) and later the Daily Herald and Manchester Guardian papers.

It was in Britain that he found fame, particularly for his “Colonel Blimp” depictions and his merciless satirising of the politics of Hitler and Mussolini. 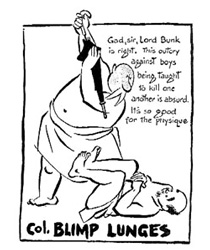 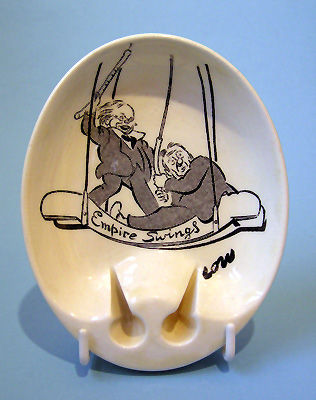 This is one of a series of five cartoons by Low and depicts Stanley Baldwin and Max Beaverbrook. Baldwin was Prime Minister of the Conservative government of 1924-29; Lord Beaverbrook was the owner of the Express and London Evening Standard newspapers. Beaverbrook became increasingly nationalistic in his political views and in 1929 joined with Lord Rothermere, another newspaper baron, to form the United Empire Party. They urged the Conservative Party to remove its leader, Baldwin, and replace him with Beaverbrook. They also argued for a reform of the House of Lords to make it possible for peers to be elected to the House of Commons. This dispute divided conservative voters and enable the Labour party to win the General Election in 1929. The cartoon is a reference to that dispute.

An Ashtead Potters Cho-Kr ashtray “Our hearts are light, they sail with ease, side by side, in love’s fair breeze”

The rhyme on this ashtray reads “Our hearts are light, they sail with ease, side by side, in love’s fair breeze”. The characters depicted are Ramsay MacDonald and Stanley Baldwin. Baldwin, the Conservative Prime Minister had lost power to Ramsay MacDonald and the Labour Party at the election in 1929. Shortly afterwards the country went in economic depression. MacDonald looked at ways of cutting Government expenditure but was overruled by his cabinet, he resigned but was persuaded to form a “National Government”, a coalition with Labour, Conservatives and Liberals MP’s. Another election in 1931 saw MacDonald still Prime Minister of the National Government but disowned by his own party. Although in charge it was increasingly Baldwin who called the shots and MacDonald was eased from office in 1935. The ashtray alludes to the uneasy alliance. 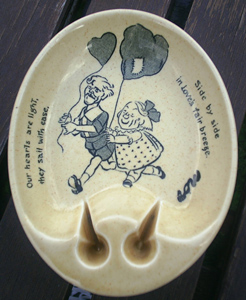 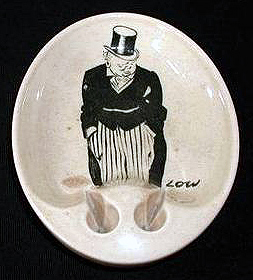 The third of four ashtrays by David Low, this one depicts a young Winston Churchill.

The significance of Churchill for this ashtray may have been because of his support of the “King’s” Party in the political infighting amongst the “establishment” of the day; lead by Stanley Baldwin, who thought Edward (the Prince of Wales) eldest son of George V an unworthy successor to George (d.20.01.1936). Churchill despite being Baldwin’s “Chancellor” (1924-1929) was very pro Edward and proposed a breakaway opposition to Baldwin’s ruling Conservatives. Despite the support of more than 40 MP’s and the huge majority of the working class population,King Edward Vlll’s position became untenable, and because of his love for Wallis Simpson, eventual abdication (1936) became his only option.

The fourth ashtray depicts Lloyd George as a lion tamer.

(does anyone have a better picture of this piece?) 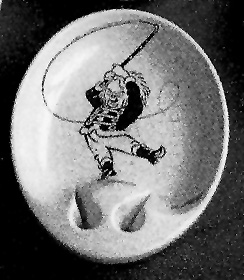 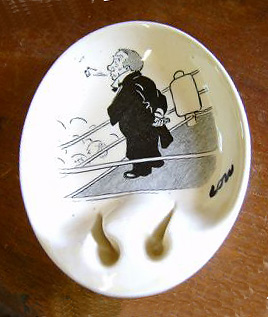 The fifth ashtray depicts Stanley Baldwin as a Boxing Master of Ceremonies. Some more research needs to done to find the relelvance of this. 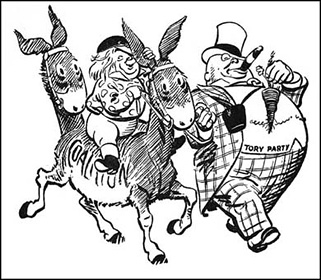