All modelled by Percy Metcalfe

Bruce is the only sitting Australian Prime Minister to have lost his seat at a General Election. The Ashtead jug serial No.1 of Bruce has now been acquired by the National Portrait Gallery in Canberra, Australia.

The four shown here are all finished in the plain Pearl Barley glaze (k). Stanley Baldwin and Lloyd George are also known to have been produced in various blue glazes and white. They were all issued in numbered limited editions – 1000 for each for the British Prime Ministers and 500 for Lord Hailsham and The Right Hon. S.M. Bruce. However, the Stanley Baldwin Jug is fairly common and it is thought that this may have been reissued. Conversely, Bruce being an Australian subject is much harder to find. The jugs were produced between 1925 and 1928.

(Many thanks to Don Patterson for providing additional information about S.M. Bruce)

Franklin (b.1706) first visited London in 1724. He came at the request of the Governor of Pennsylvania to purchase printing equipment, a trade he had learnt from the age of 12 as an apprentice to his brother James. In 1725 he published a dissertation “Liberty and Necessity”. He returned to Philadelphia in 1726 and soon wrote for and published “The Pennsylvania Gazette” which became an immediate success. Benjamin Franklin was also an inventor, a scientist, musician, philosopher, economist and of course a statesman.

Franklin later became one of the signatories to the 1776 “Declaration of Independence” – the jug shows Franklin holding the Liberty Bell. It seems likely that it was the 150th anniversary of Independence that was the reason for issue, but it could be that the jug commemorates that earlier period in London – the star date code is for 1925/6. The modelling was by Percy Metcalfe. The piece stands 25 cms tall. It states on the base that it is a limited edition, but of how many is not known. 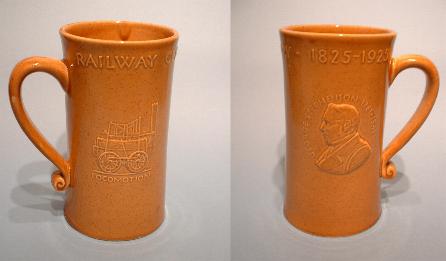 This commemorative was issued for the Centenary of the railways, 1825-1925. It features the engineer George Stephenson on one side and his pioneering locomotive the “Locomotion” on the reverse. The tankard was commissioned by the L.N.E.R. It is finished in buff glaze (t).

Mitcham in Surrey was given its Charter to hold an annual fair in Elizabethan times. The fair, traditionally held on August 12th, has taken place virtually every year since then.

The beaker depicts the coat of arm for Mitcham. The principal colour of the shield would be green, a reference to Mitcham Green. The waves indicate a river or ford, as the upper part of Mitcham was formerly called Witford or Waterford. Below is a tower, which represents the Great Dwelling or ‘Mitchelham’, as the lower part of Mitcham was formerly called. The crossed keys and sword represent St. Peter and St. Paul, who are the patron saints of Mitcham, the sprigs of lavender are a reminder of the lavender fields for which the area was once famous.
The mural crown is a symbol of civic government.

The reverse of the beaker states “1934 – Mitcham’s Charter Year”. Mitcham was granted its Coat of Arms in September of that year.

Many thanks to Robert Young for the heraldic information and the Coat of Arms. These came from his excellent civic heraldry website and are used with his permission. 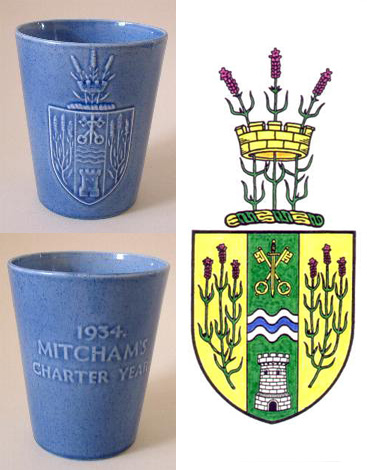 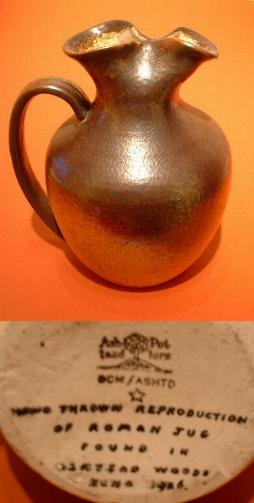 This item loosely falls under “commemoratives”. In the 1920’s the site of a Roman villa was found on Ashtead Common (Ashtead lies just to the west of the course of the Roman road “Stane Street”, which ran from London to Chichester).

The jugs are marked on the bottom: “Hand thrown reproduction of a Roman jug found in Ashtead Woods June 1926”. This one has very glossy finish, others are more muted, it stands 22 cms tall and weigh 2.5 kilos!!

The piece is a replica of the Lion designed to sit atop the Menin Gate in Ypres (below). The plinth is marked with the name of the sculptor and is dated 1927. The model measures about 9″ long. It was also produced in a smaller 4″ version (M55) but lacks the clarity of detail of the larger one, and has been described, rather unkindly, as a “jelly mould”! The smaller model does not have the inscribed mark or date. The finish is plain Pearl Barley glaze (k). 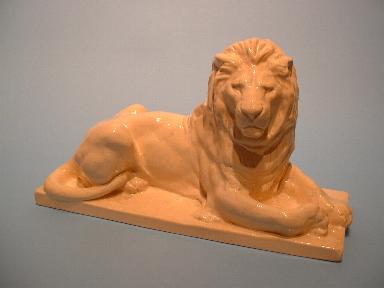 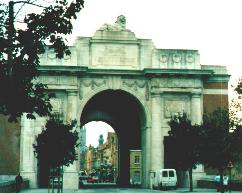 Designed by Sir Reginald Blomfield. Reid Dick’s Lion can be seen on the top. 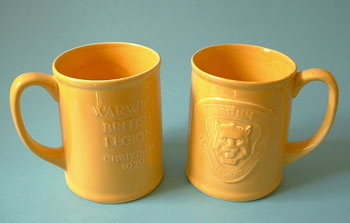 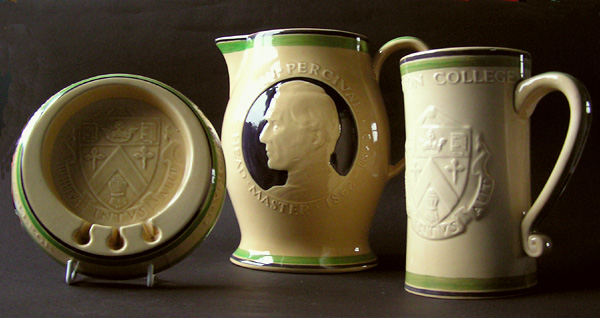 Ashtead Potters produced several different pieces for Clifton College, Bristol. Shown here large jug (J29) with John Percival in relief on one side and the College Arms (shown in the ashtray) on the other. As can be seen from the marks below, this piece was designed by Allan G. Wyon. It is is to be assumed that he also designed the “cho-kr” ashtray (S27) and a pint capacity tankard (J44). There is also a beaker of similar size to the one for the Mitcham Charter. 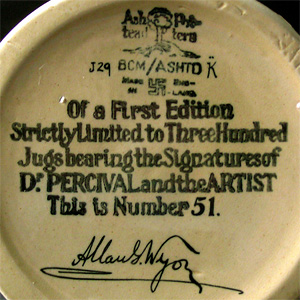 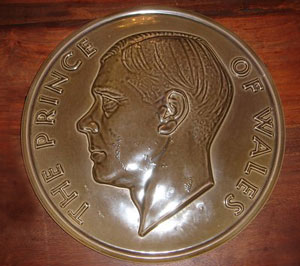 This plaque is known as the “Prince of Sportsmen” (model AA). The plaque, modelled by Percy Metcalfe, depicts Albert Edward, the eldest son of George V(1865-1936), who would later a become King Edward Vlll (1936- abdicated).